The Mercury Bay Museum was officially opened in 1979 after a decade of intensive planning, sourcing items for the collection and fundraising to purchase a suitable museum site.

Much credit for the establishment of the museum should be given to Mr. B. De Boer Town Clerk of the Coromandel County Council, the Whitianga Lions club and members of the community who provided voluntary and financial support for the project.

During the mid 1960's and up until the late 1970s much planning, many communications and a restructure of the Coromandel County Council all took place.

Plans for Centenary Celebrations – Including a new museum

In the mid 1960’s Mr De Boer was involved in planning for the centenary celebrations of the Coromandel County Council (which became the Thames Coromandel District Council). His dream was that a complex of County facilities, including a library and museum be built on county land on Monk St in Whitianga. While these facilities were not established on the Monk Street site, the museum was located a decade later on the site of the old dairy factory on The Esplanade.

Collecting Items for the Museum

In 1969 the Whitianga Lions club became aware of this potential plan for a museum to be established in Whitianga. The club were very supportive and started collecting items from the past, particularly from both the whaling and mining heritage.

Items that were collected by the club over the years were old whaling pots, a blubber pot, a mining stamper battery and mining equipment. Several members supported by Sonny Brown succeeded in finding and recovering an old steam engine from the commune up the Mahakirau Valley.  It was reported that it was a "hell of long way to walk in and even further to walk out" on this excursion to recover the steam engine.

During this period letters were also sent to the Forestry Dept asking permission to remove a steam engine, petrol engine, bedans and equipment from the Rangihau for the museum.

As the items in the collection began to grow it was evident that somewhere to store them would be required. Local resident Bill Lee came forward and offered space on his property for the storage of the items which were to be part of the future museum.

Retrieving mining items from the bush for the proposed museum collection.

Throughout the 1970s the Lions Club continued collecting artefacts and continued negations with both local and national Government agencies together with other commercial bodies in endeavouring to progress the museum project.

Communications and support for a local museum to be established in Whitianga began to grow. In a letter sent to the County Council the Lions Cub asked for clarification on the proposed Museum. The Club asked:

If possible we would like to know Council’s intentions regarding this project,

a. Would a subsidy be available if lions Club can raise specified sum,

b. Would materials be supplied if Lions Club supplied Labour to erect building, or

c. If the Council is not in the position to make any promises could the Lions Club take over the whole project and administer same.

Our chaps are pretty keen about the Museum and would appreciate to know what can be done regarding the above suggestions or possibly Council may have some more ideas which would help.

The Council received with pleasure and interest your letter ... in which your club suggested various ways in which it would like to become involved in the provision of a museum at Whitianga. Council seemed to think that it could make land available at the Taylor Estate in the centre of Whitianga, but further commitments would depend on finance available for such a project.

The old dairy factory becomes a contender for a museum

Letters were sent to the Whitianga Lions Club in 1971 and 1972 by Mrs Myers and Mr Myers (later known as Sir Keith Myers) suggesting that the old dairy factory building would make a good museum and their support for this. They would later provide significant financial support to help purchase of the dairy factory.

In July 1974 a Lions Club Museum sub committee represented by Bill Lee, Harold Abrahamson, Murry Speer and Lindsay Halligan was formed to progress communications with the dairy factory owners. The Lions Club then contacted the Thames Te Aroha Dairy Company to see what their attitude was towards a sale or donation of its buildings. They wrote the following to a local member of the Dairy Company' Board Mr F Lilley of Whenuakite:

The Lions Club of Whitianga has been for some years endeavouring to promote the establishment of a local Museum at Whitianga to collect and display the numerous artefacts and Historical Items of interest relating to this area. Such a Museum would create tremendous interest both among the local populace and the ever increasing number of visitors that stay and past, through Whitianga.

It is the opinion of the members of the Club that the vacant Milk Factory building previous used by the Mercury Bay Dairy Co, situated on the Esplanade, would be suitable site that could be adapted for such a Museum.

The Club would appreciate if you, as the local member of the Board of the To Aroha Thames Valley Co-op Dairy Co Ltd, would press to the Board a firm proposition from this Club. That the Lions Club of Whitianga wishes to purchase the Building previous used by the Mercury Bay Dairy Co for the purpose of establishing a local Public-Museum.

The Club's offer is for the purchase of the Factory and surrounds only and does not include the Trading Store. The Club would appreciate if the Board would give this offer their sympathetic approval and place a firm price for the Club to negotiate on.

Subsequently an offer of $40,000 was submitted for the land and the building as it was. The Thames Te Aroha Dairy Company responded with a firm price of $52,000 for the purchase of the old Dairy factory (subject to the land being suitably surveyed). While the Lions Club had a shortfall of the full funds requested for the purchase Mr Bill Lee Chairman of the Lion’s Museum Committee stated in September of 1975  that he felt the project was fast becoming a reality.

Original Dairy Factory at Whitianga about 1930. The new factory (now museum) was built in 1936.

The Turning Point - funds to purchase the museum building

By June 1978, the Lions Club had continued fundraising and were confident that they would be able to purchase the Dairy Company property. A highlight came in November when the museum appeal fund stood at $55,351.99. Legal delays meant that it was not until June 1979 that it was finally completed.

Museum Opened to the Public

The official opening of the museum was held on Friday 7 December 1979. The headline in the Thames Star Newspaper read:  FACTORY GIVEN NEW LIFE AS MUSEUM.

It was saddening to see the old factory close, but in a way this will preserve it for all time.

Mr Fred Lilley the deputy director of the Thames Valley dairy Company at the opening of the museum. The honour of opening the building was rightfully given to Lady Margaret Myers who together with her husband Sir Kenneth contributed in excess of $10,000 towards the project.

It just goes to show what a small community can do when the people get behind it.

Mr Len Braddock chairman of the Thames Coromandel District Council congratulating the district on its efforts to acquire the property. 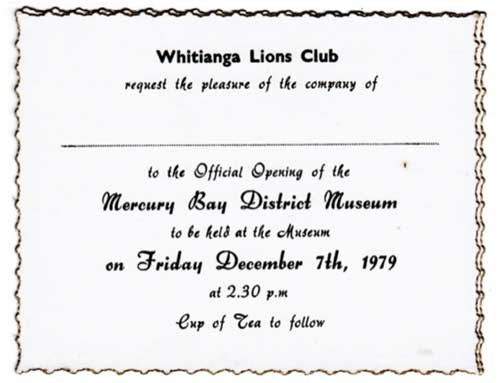 Example of the invitation card for the official museum opening.

Since its official opening in the late 1970s the Mercury Bay Museum has certainly given the old dairy factory a new life.  The Museum hosts significant local artefacts and showcases local history in this unique setting on the waterfront in the old diary factory building. The museum is enjoyed and has been visited by thousands of local and international visitors alike.

History Articles
As we approach the Summer season for 2020, the Pohutukawa (Metrosideros Exelsa) or...
AB
Alastair Brickell
November 06, 2020

History Articles
Geology is our history writ large. It is all around us in the rocks and landforms ...
JJ
John Jackman
October 01, 2020

History Articles
Our Coromandel Peninsula is well known for its spectacular scenery and its past vo...
DW
Dick Wilson
October 01, 2020

© 2021 All About Whitianga. All rights reserved.