On November 3 in 1769 Lieutenant James Cook arrived in His Majesty's Bark Endeavour in the Mercury Bay and observed the transit of the planet Mercury. Fast forward into the future and November 2019 will mark 250 years since he stepped ashore.  Across New Zealand and Mercury Bay planning is underway to commemorate this sestercentennial. There will be a range of events in Whitianga and the wider Mercury Bay to celebrate Captain Cook's visit to the area.

Cook's 12 days in the Mercury Bay

Cook not only observed the transit of Mercury during his stay, he also established the geographic coordinates of New Zealand whilst in the bay.  Of equal importance was the shared Maori and Pakeha experience at Te Whanganui A Hei at that time. It was here where mutual respect between Europeans and local iwi evolved. This was a formative meeting place of our now multicultural nation.

A local Trust has been established to coordinate and plan for events that will mark this anniversary of Cook's arrival in Te Whanganui A Hei (Mercury Bay). Currently the Trust has five trustees, a patron and advisors to support its work.

Celebrating this milestone in New Zealand history, and the significance of what took place during Cook's 12 day stay in Mercury Bay will be the focus of local, national and international attention.

The Trust has identified three key project themes which will be integral to commemorative events in Whitianga and the wider Mercury Bay Area that recognise Cook's on-going legacy in Mercury Bay. The themes will be relevant and enduring, for both the wider Coromandel Peninsula area and the nation as a whole and include:

The Trust is also liaising with similar regional organisations which have been established in Gisborne, the Bay of Islands and Queen Charlotte Sound. Gisborne, where Cook first stepped ashore in New Zealand, followed by Mercury Bay, the Bay of Islands and Queen Charlotte's Sound. All being the key sequential stopovers during Cooks 1769/70 circumnavigation of New Zealand.

How to get involved

The primary role of the Mercury 250th Anniversary Trust is to work with central and local government as well as inform and engage the public, community organisations and other interested parties who may wish to participate. A priority is encouraging public support and participation in staging of commemorative events which will leave lasting memorials that recognise the prominent role Te Whanganui A Hei played in New Zealand's early history.

A public meeting will be held to discuss event planning for Captain Cook Commemorations in Whitianga early in the new year to inform the local community on what is being planned for the anniversary.

Get there and back without drink driving. Legend!

From Whitianga From Cooks Side

Next 5 Events in Mercury Bay 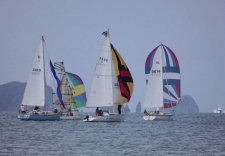 We have 255 guests and no members online